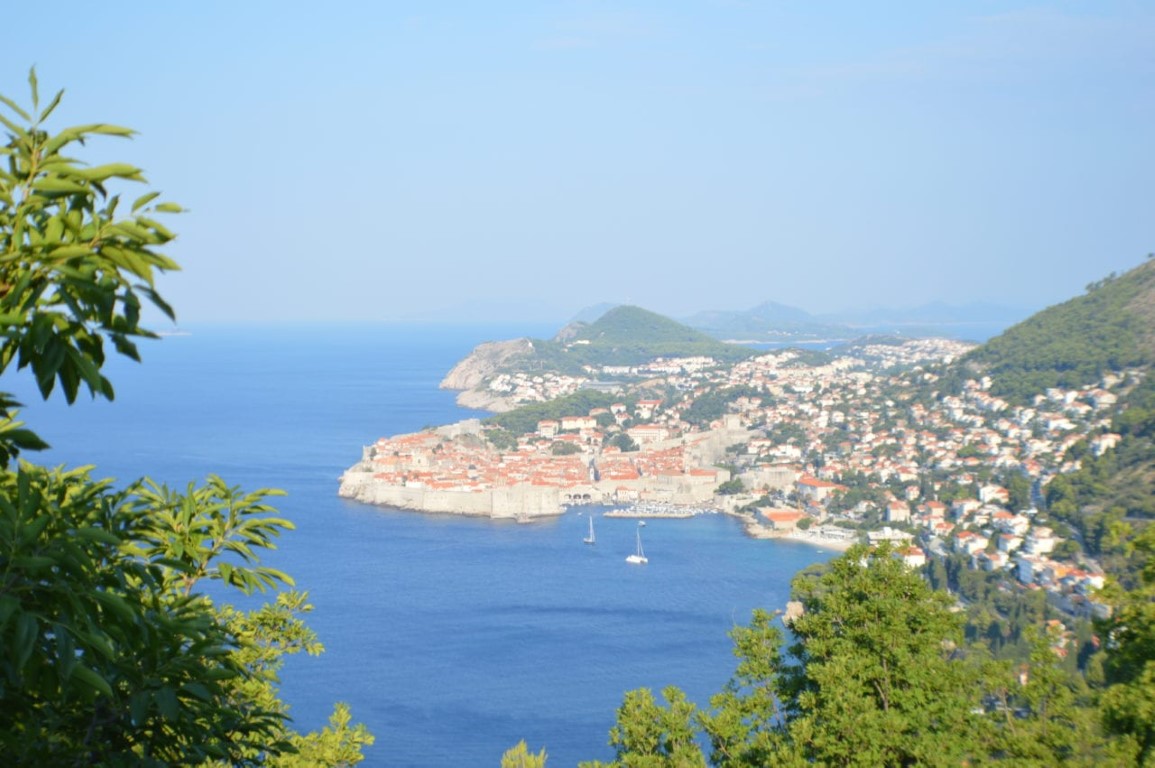 A narrow, coastal region, one of the four historical areas of Croatia, mostly covered by rugged dinaric mountains – this is what Dalmatian Coast Motorcycle Tour covers. And riding it, gives you great views over the Sea and some of the islands of the Adriatic Sea.

This is our next destination. Since we start the day early, leaving the region of Plitvice Lakes, it is a bit foggy and chilly.
However, as you approach the sea side you’ll want to get rid of most of your clothes.
After a refreshing mountain ride we arrive in the city of Zadar right on the coast of the Adriatic.
Enjoy a great coffee and some refreshments in a coffee shop overlooking the port.
A nice walk to Zadar Nova Riva will show you a great old city with friendly people.
Stop at the Riva of Zadar to listen to the Adriatic waves pushed by the Wind playing The Sea Organ (Morske Orgulije).

The Sea Organ is the work of the architect Nikola Basic.
The waves are pushed by the wind under the marble steps of Nova Riva (The New city coast). They interact with a system of pipes creating the music of the sea. This unique organ attracts tourists and locals alike to listen the music played by nature.
As you leave Zadar through the old city gate, continue your journey along Dalmatian Coast with a breeze.

The ride is filled with photo opportunities. So take your time and enjoy the scenery and the ride. Don’t forget to stop for lunch in a traditional restaurant offering roasted lamb or roasted baby goat.
Don’t worry that you won’t know which one serves such a meal. The restaurants roast the meat in special built grills placed right on the side of the street.

Moreover, you’ll see it from afar and the smell and the view will force you to stop at some point. Mouthwatering.
Arrive in the afternoon in the city of Split – the second largest city in Croatia. Accommodate in a cosy 4* hotel and be amazed by the ruins of the Roman Palace of the Emperor Diocletian. A relaxing afternoon on the Beach will revigorate you. Bacvice Beach is strongly recommended being the most popular sandy beach in the Eastern Part of the city. Don’t  be afraid to try the Split game of picigin. If you don’t have a small ball you can try it using your go pro camera, it’s just as fun, especially if it is recording.

Dubrovnik – Pearl of the Adriatic

Clear turquize water, private beach, old medieval city, fresh sea food, leave it all behind and continue riding your motorbike on the Dalmatian Coast. The sinuous road takes us out of Croatia in Montenegro. The border crossing is easy. Papers checked, motorbikes checked, riders checked – and Kotor here we come.

The ride is smooth. A great road with amazing views – a refreshing ride along the Bay of Kotor. Crossing the city of Perast you just cannot miss the 2 small islands, each one having a church on its land: Church Of Saint George (Sveti Djordje) from the 12th century and the Church of Our Lady of the Rocks (Gospa od Skrpjela) erected in 1630, a church built in the baroque style.

Our Lady of the Rocks was built on an artificial island, created by rocks and sinking ships loaded with rocks.
According to the legend, after finding the icon of Madonna and the Child on a rock in the Sea, on a summer day – July 22, 1452, the local fishermen took an oath to throw a rock in the Sea every time they will return from a succesful voyage.
Time has passed. Succesful voyages have been made judging by the fact that a small island was formed by the rocks thrown in the water by the seamen.
Up to the present time, the custom of throwing rocks into the Sea is kept.

On the Sunset of July 22, every year, an event called fasinada takes place in the region of Perast. The locals take their boats and throw rocks into the Sea, widening the surface of the island. The traditional celebration got its name from the Italian word fascia meaning tape or binding. The boats, decorated with popular branches and loaded with rocks, are tied together.

The boats carry only the local priest and the men descendents of famous fishermen. The women remain on the shore and wave. Take pictures to the two beautiful islands and continue your journey to the city of Kotor.

Located on the beautiful adriatic Coast of Montenegro, the city of Kotor is a UNESCO World Heritage Site.
With its well preserved medieval old town, beautiful architecture and sea side, the city attracted the attention of Lonely Planet Travel Guide, placing it first among the citied that should be visited in 2016.
An amazing ride for you – The Lovcen Serpentine Boka Kotorska. The Road from Trojica to Cetinje was built between 1879 – 1884 by the Austro-Hungarian Empire and the Principality of Montenegro at a very high cost – one golden ducat/meter.


About 45 km of serpentine, hairpin curves cutting through rough terrain making way for incredible motorbike rides and opening a heavenly view of the entire region of Kotor Bay – at your feet. Lunch in Cetinje – former capital of Montenegro and dinner in Skopje, Albania.

Language: English and German is also spoken
Hotels: we recommend you accommodate in a 3* or 4* Hotel with private beach and views to the Sea.
The Bus to the Old Town of Dubrovnik will only take a few minutes.
Food: try some Sea Food, it’s always fresh and they surely know how to cook it
Motorbikes: bring your own motorcycle or a BMW motorcycle rental in Eastern Europe, the GS range is strongly recommended.

Organized tours: available
A trip with no worries: where to park safely the motorbike over night, not knowing the language or how to get to the hotel? All prearanged.
All you have to do is ride the 2 wheel marvel and enjoy the views. The only worry you’ll have is that the time flies when you are having fun and the 18 day multi-country adventure in Eastern Europe will seem too short.
For more detail on the tour visit Eastern Europe Motorcycle Tour page.